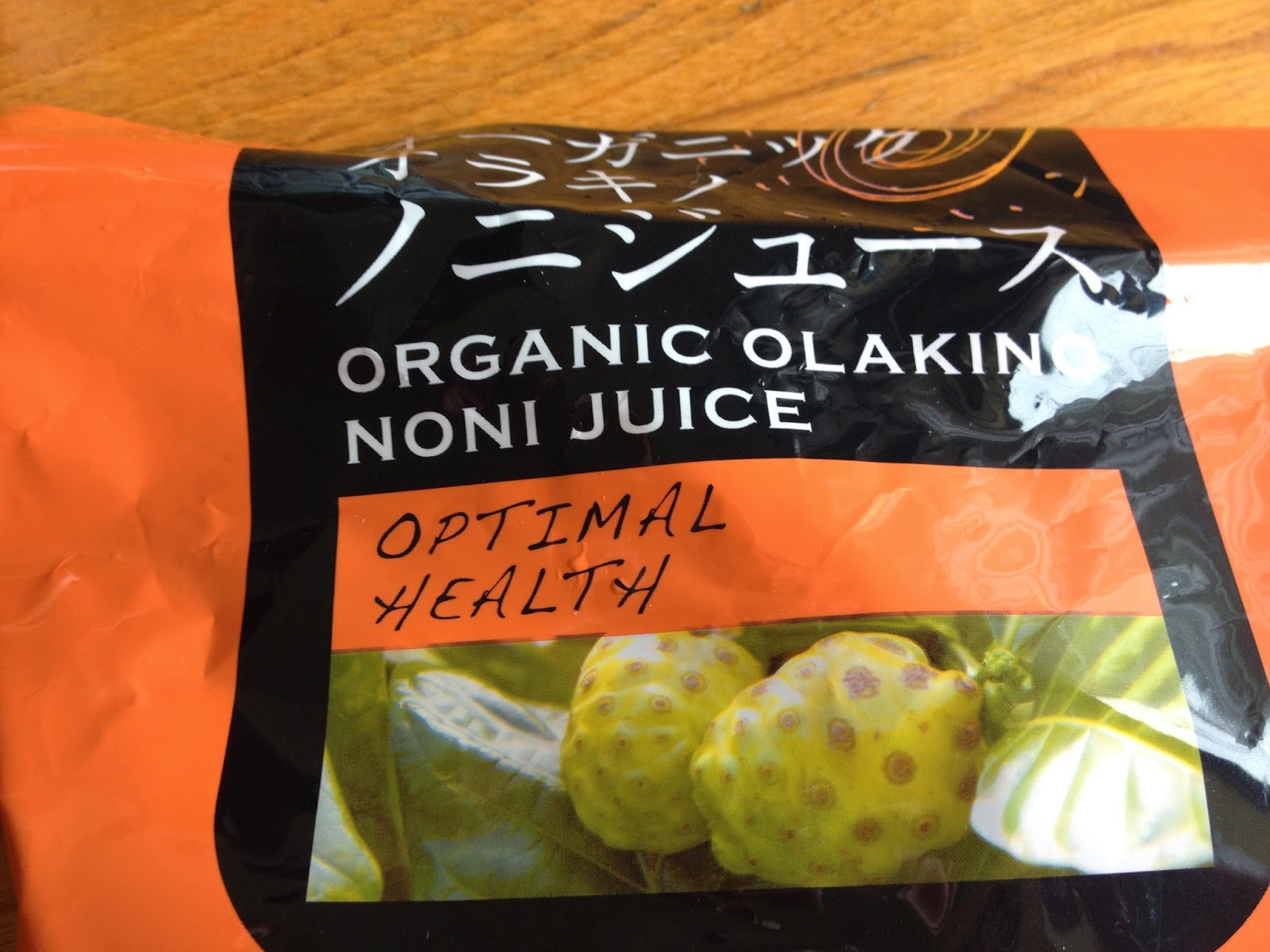 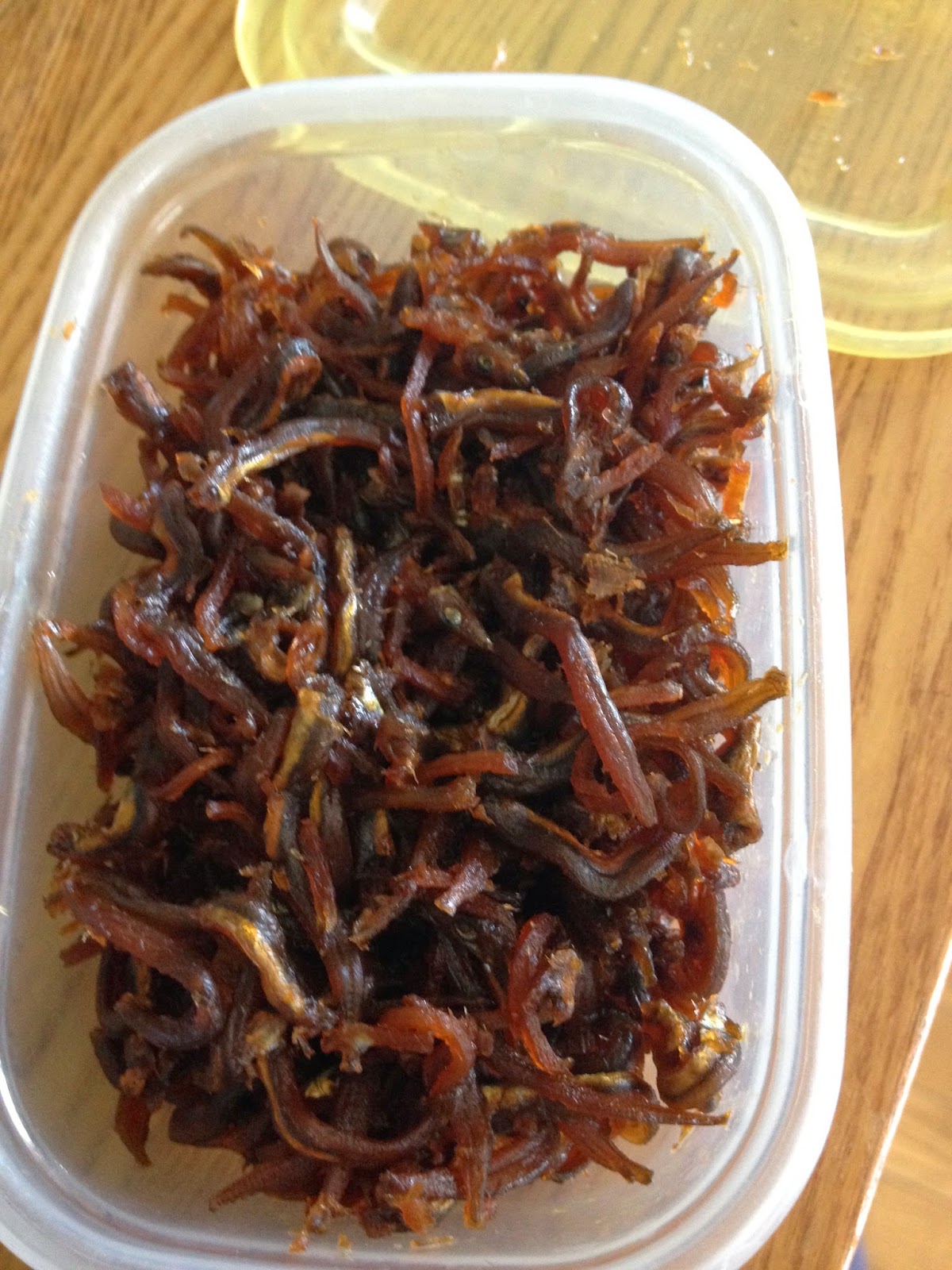 代謝がすごくよくなるというノニジュース。これだけでは私はまだ飲めないのでレモンとジンジャーシロップとの水割りでまずは挑戦。くせになる、かな？なんとも体験したことのない不思議な味です。下は近所の方にちょっとしたお裾分けしたら、お裾分け返しにくださったきびなごのくぎ煮。美味しい。こういう交換はすごく好きです。
I was drinking noni juice in this few days, with lemon, ginger syrup and water. I can't drink without theses yet because of the specific taste of it. I can't describe it, even I don't know I like or not...But it is very good for metabolism I heard, so I try. Mysterious taste....
The photo below is traditional boiled small fish with sweet soy sauce taste, especially popular among the people in the west area of Japan. My friend gave me. I like it very much.
投稿者 Momo 時刻: 18:35

It was like a summer day. I went to yoga class in the morning and I walked around outside all the afternoon, so I felt bit dizzy because my body are not ready for these summer-like temperature. I need some workout for coming summer, I think.

When I'm confused, I often read Dalai Lama's book. There's a video which he speaks to the tourists who visit Dharamsala, india. I was bit surprised how he speaks, he was very cheerful and laughed a lot during his talk, not solemn even the talks itself is very serious, has good sense of humor. I understood the one of the reason why his words reaches and moved so many people all over the world from the way he talks. His words are simple and easy to follow but very difficult to do in our daily life. It need practice and discipline, and the ability of showing love and compassion to others improves little by little even one always remembers and keep practicing. It's exactly like a music, practice everyday, and can go forward step by step. Only each steps I made by myself lead to the goal, countless goal will be appeared though, which I dreamed.
投稿者 Momo 時刻: 2:29 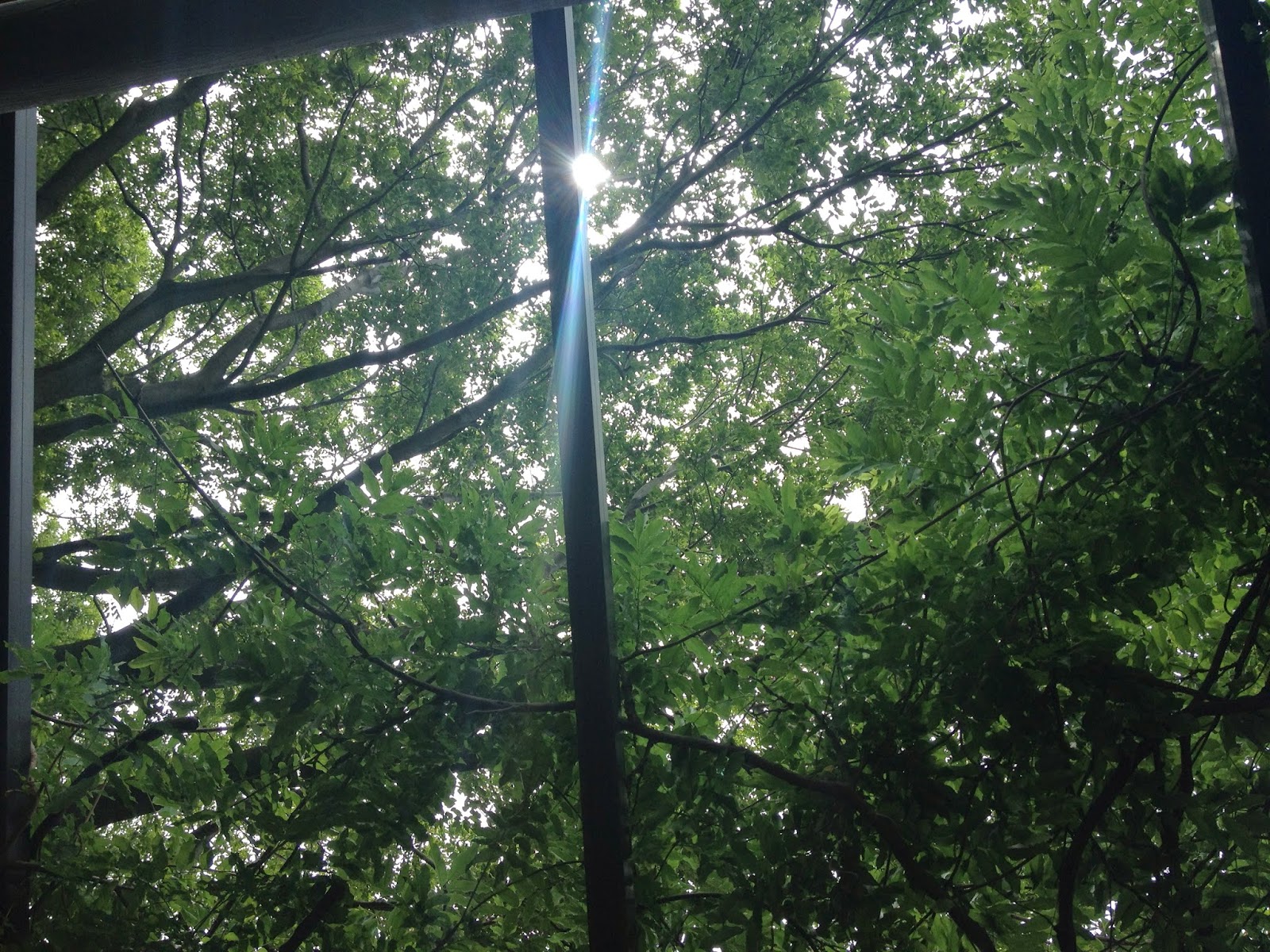 カリフォルニアの銃乱射事件、被害者のお父さんの会見を見た。Sandy Hookの事件もまだ記憶に新しい。アメリカは変わってゆくんだろうか。アスペルガー症候群や自閉症の方への偏見や差別につながらない事を切に願いつつ、犠牲になられた方々のご冥福をお祈り致します。BBC news
I felt strong sympathy with him. One of the victim's father spoke about the California shooting. (BBC news) I understand the problems are not so simple but his words are so simple, strong and touching. I respectfully offer my condolences to the victims and hopefully it will never happen again. Also I really hope it won't connect to any discrimination against Asperger's syndrome.
投稿者 Momo 時刻: 1:29 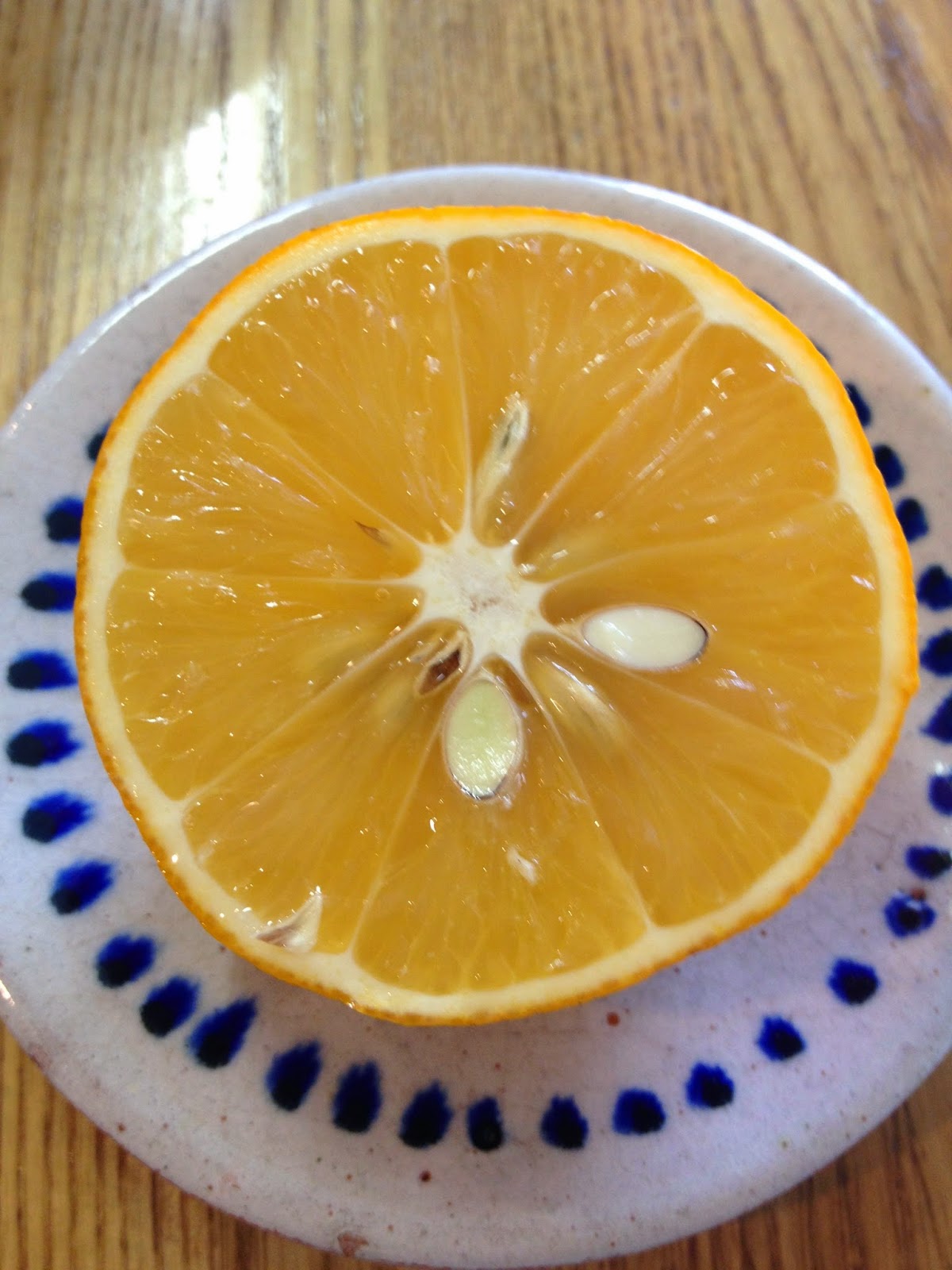 きれい。ホレボレしました。朝まっぷたつにした完熟レモン。無農薬。そして美味しい。
さっき車でたまたまラジオをつけたらWeinbergさんの特集をしていた。恥ずかしながら私はこの作曲家知りませんでした。とても好き。交響曲、きちんと通して聴いてみようと思いました。
Beautiful lemon:) There is an organic vegetable shop near my house and they sell a no-waxed Japanese lemons. I love it.
When I turned on the car radio few hours ago, I heard music which I really like. It was Mr. Mieczysław Weinberg's 10th symphony. I didn't know him till now but his music touched my heart. I'm so interested in his life and music now.
投稿者 Momo 時刻: 23:46

One of my favorite song-writer, Mr. Hikaru Hayashi's composition called "America America" is a type of music that I've never try. Ms. Yoshikawa, soprano singer, brought the score to play for the concert in this summer. Few days ago she gave me the recording as well which Mr. Hayashi accompanied by himself for Ms. Yoshi Ito. I didn't catch the clear vision of the song and world of the lyric, which is very fantasy-like,  yet, but I fell in love this song immediately and it's fun to get into it. I wish I could have a chance to ask about the song to Mr. Makoto Sato who wrote the lyric.
投稿者 Momo 時刻: 13:39 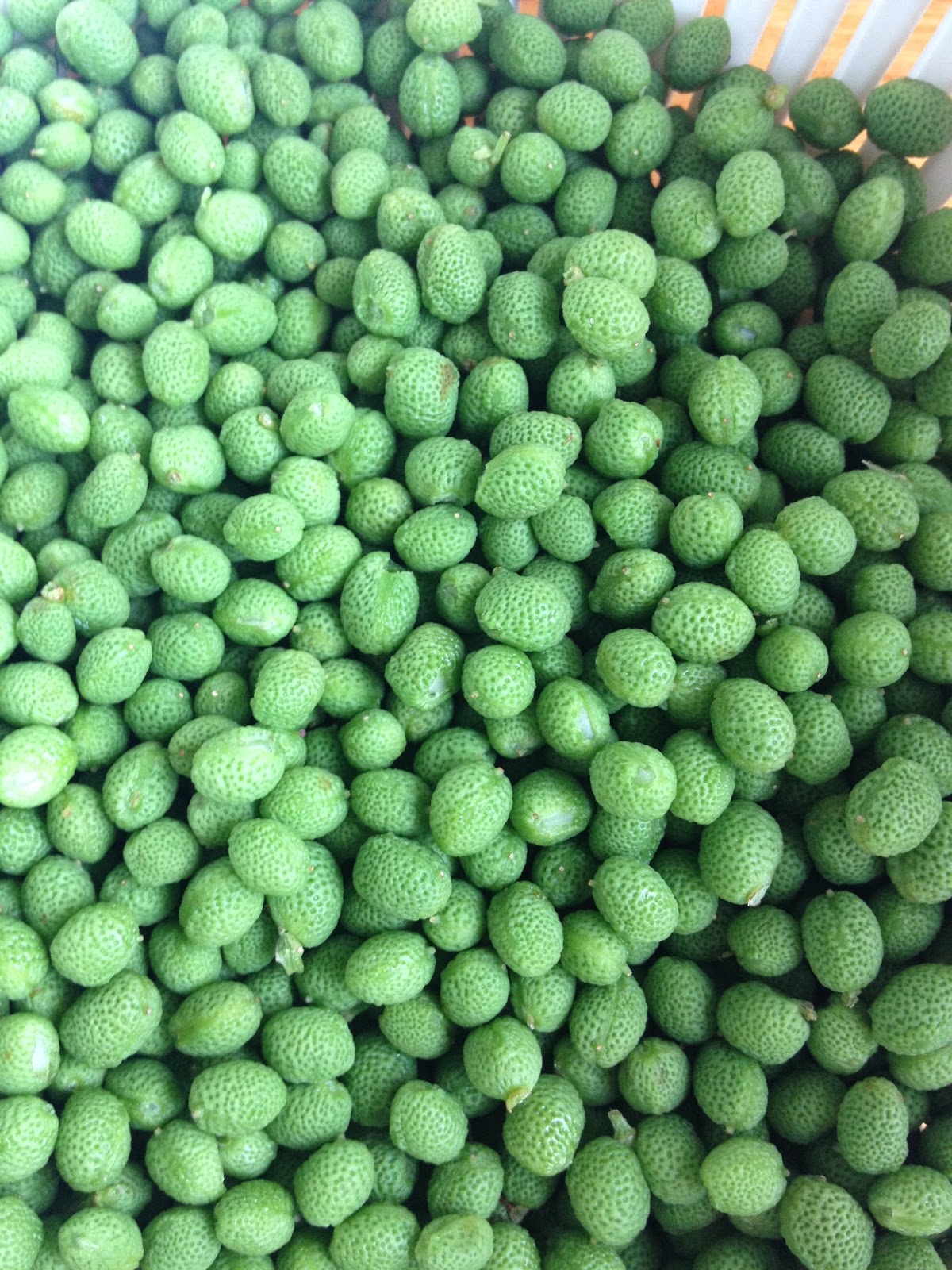 I picked Japanese-pepper grain from the branch, one by one, by hand. I will pickle them with salt. It's one of the significant spring taste in Japan, I like it very much.  The photo is the grains of it.

I went to yoga in this morning. I didn't practice for a while, so I felt stiff especially in my back but it always works well for me. After the class I could felt some space in my body and it helped me to breath deeply.

In the evening, there was a concert conducted by trombone player, Mr. Osamu Matsumoto. It was his new band's debut concert. The club was packed with the audience. It was wonderful concert, more "the show" than usual jazz concert. The arrangement of the songs are also great. I respect Mr. Matsumoto a lot. He has a sense of balance between the art and the entertainment, and I think that's the way how he survive in his long career.

The concert reminds me Mr. Louis Armstrong's music although their musical direction is very different. Mr. Joe Wilder who passed away recently told about him in a interviews(African American Legends), and he answered "Louis is the highest" when he was asked who was his favorite player. He's the not only one who said that, his music is really loved by many professional musicians, not only by the audiences. Mr. Armstrong's music has some kind of core of the music which make everyone smile and can share with.
投稿者 Momo 時刻: 0:50 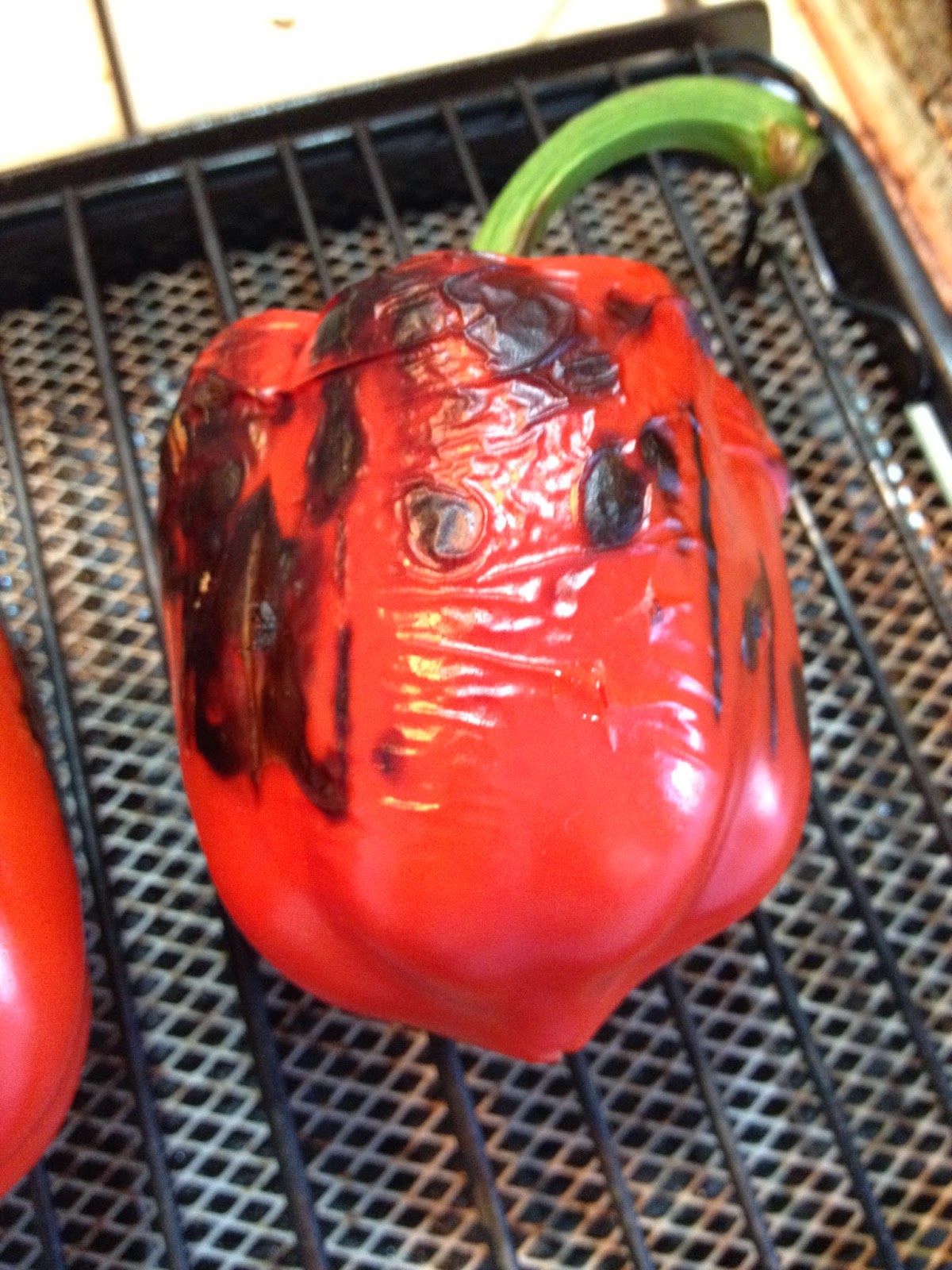 美しい5月の日曜日。こんな日があると生きているのは素晴らしいなあと思う。昨日はレッスン。いろんな事を勉強させてもらっています。理解の回路がなかなか繋がらない私は、日々勉強できることに感謝して油断せず精進しないといけないなあ、と疲れて流されそうな時に思う。午前中は家事をして昼からやさしいワニという私の曲を編曲。まだ捉えられていない。道は有りそうなんだけれど。写真はマリネ準備中のパプリカ。黒こげ。
Beautiful day...! So grateful to be in this world when I meet a day like today, I feel tranquility inside of me. I had a student yesterday. The opportunity of teaching actually teach me a lot of things every time, and I studied a lot, maybe more than the student.
It's so fortunate to have chance to study, If I want to study, I have a hundreds choices. I should not forget how fortunate it is.
I should work on the arrangement of my song today. I see some pieces of  the picture of the song but not a whole one...I hope I can find it soon.
投稿者 Momo 時刻: 9:59 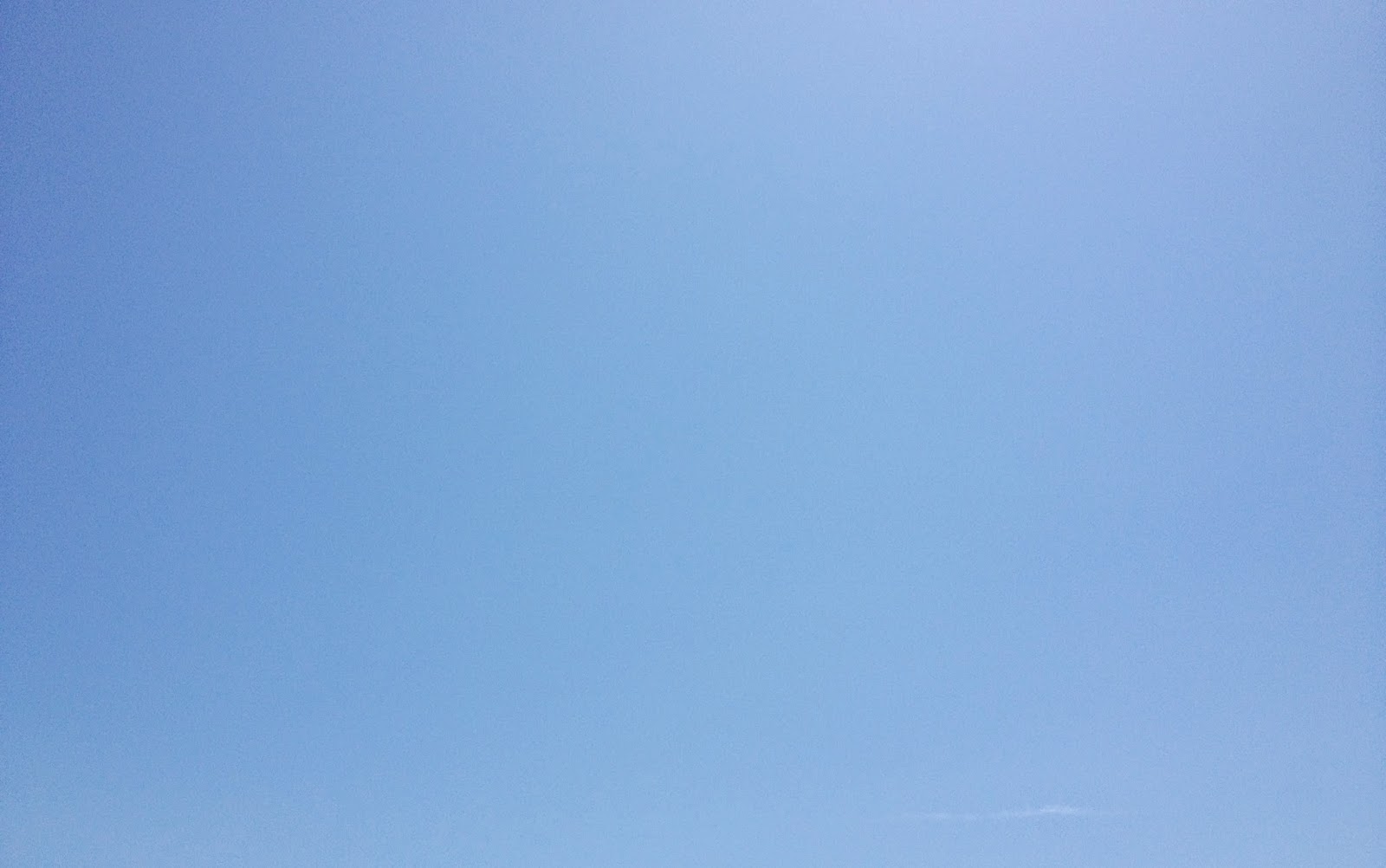 気持ちよく晴れている。洗濯日和です。今日は午後からレッスン。
It's windy, nice day, I can't find any clouds in the sky, not a slightest hint of it. I'll have some students in the afternoon.
投稿者 Momo 時刻: 12:08 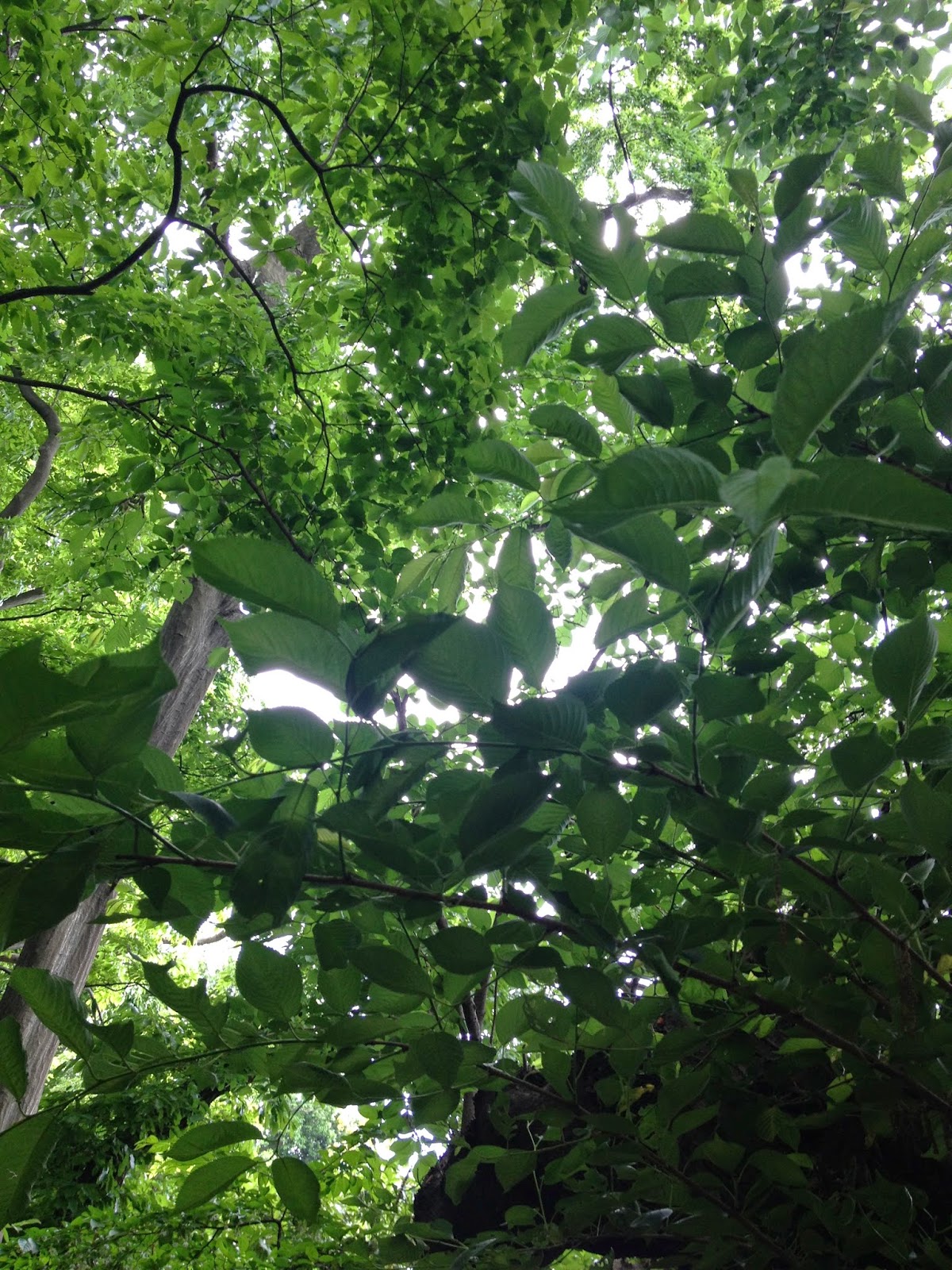 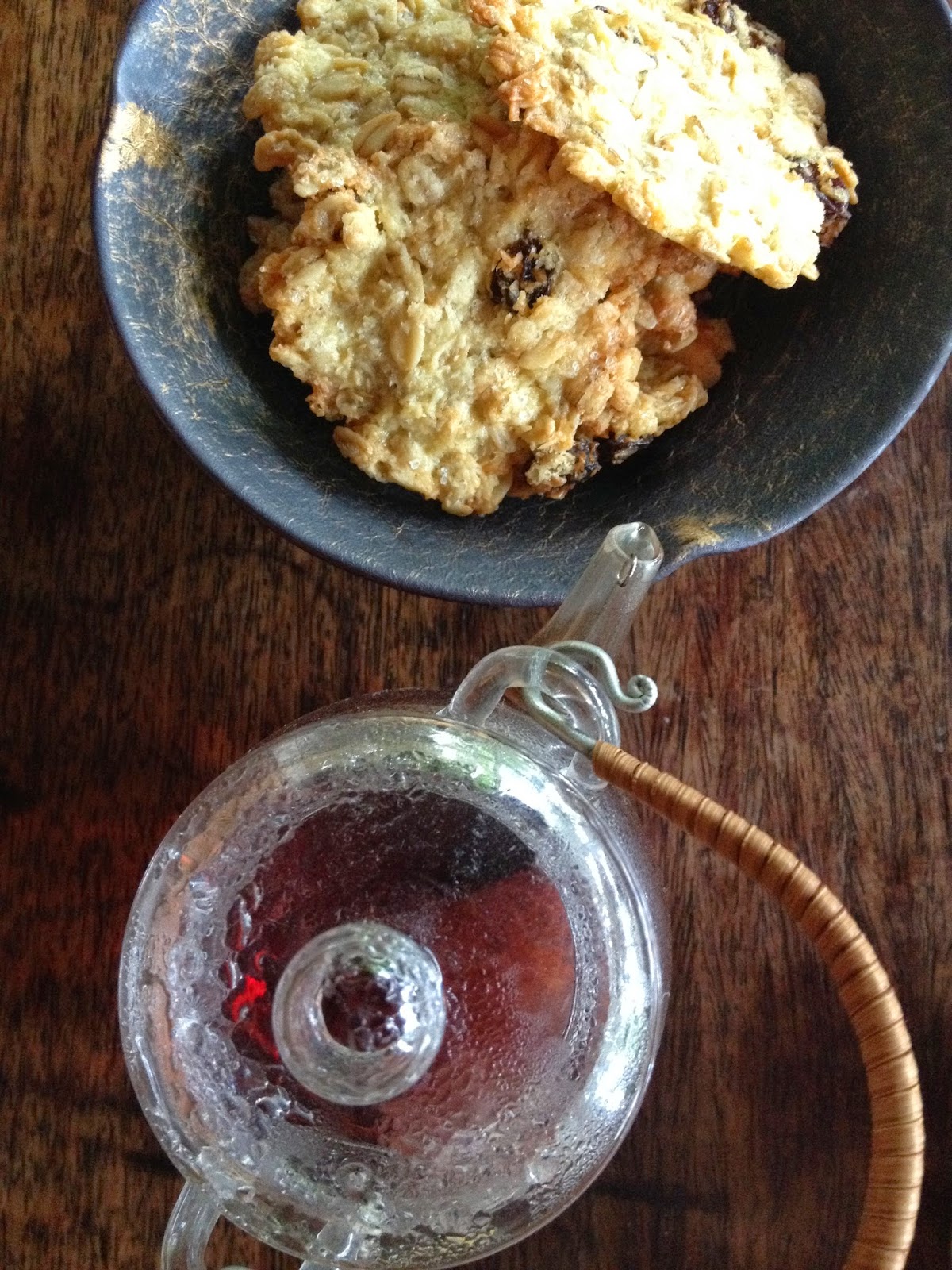 森のテラスでの月例ソロピアノでした。思わぬ方が来て下さってそれぞれお会いできて嬉しかった。お菓子の差し入れも頂き、美味しく頂きました。お誕生日の方もいて賑やかでした。来て下さったお客様ありがとうございました。来月は6/20(金)です。写真はテラスの木と今日のおやつのオートミールクッキーとローズヒップティー。
Thank you for coming to listen my solo piano concert at Mori-no-terasu. Some of the guest brought some sweets, so we all shared them. It was like a small tea party and I enjoyed a lot.  Next concert will be 20th, June.
投稿者 Momo 時刻: 17:24 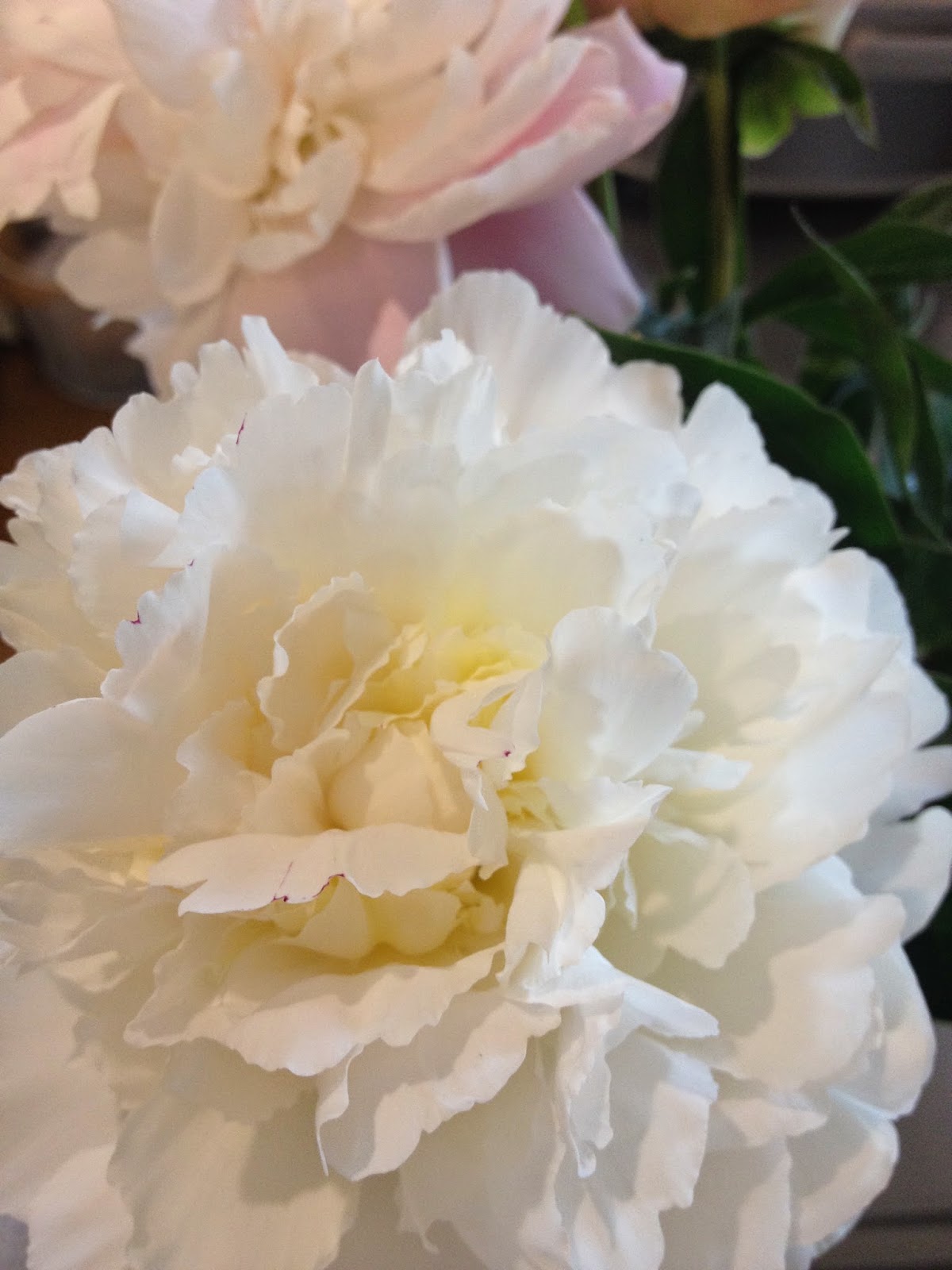 最近お花屋さんの店先でよく見かけます。豪華で好きな花。咲いているのもつぼみも、ほころびかけているのも好き。よく行く花屋さんがおまけしてくれた。きれい。
I bought several lovely shaku-yaku flower, paeoniae radix at the flower shop nearby. It's one of my favorite flower.

今日はレッスン。シッポをつかまえやすい、触れる言葉がうまくみつかればよいのに。思いやりを深く理解している人はできるのかもなあ、と思いつつ反省しきり。明日はソロピアノ。週末はレッスンと譜面書きと譜読み。
I had a lesson in Machida today. While I was talking to the student,  I was desperately looking for a "right" words to be able to reach to their heart directly, but it doesn't go well most of the time. Probably I need more empathy to be able to do it. It's long way to go but I wish I could find the way someday and hopefully I could touch their core of the heart which create their music itself.
投稿者 Momo 時刻: 0:34 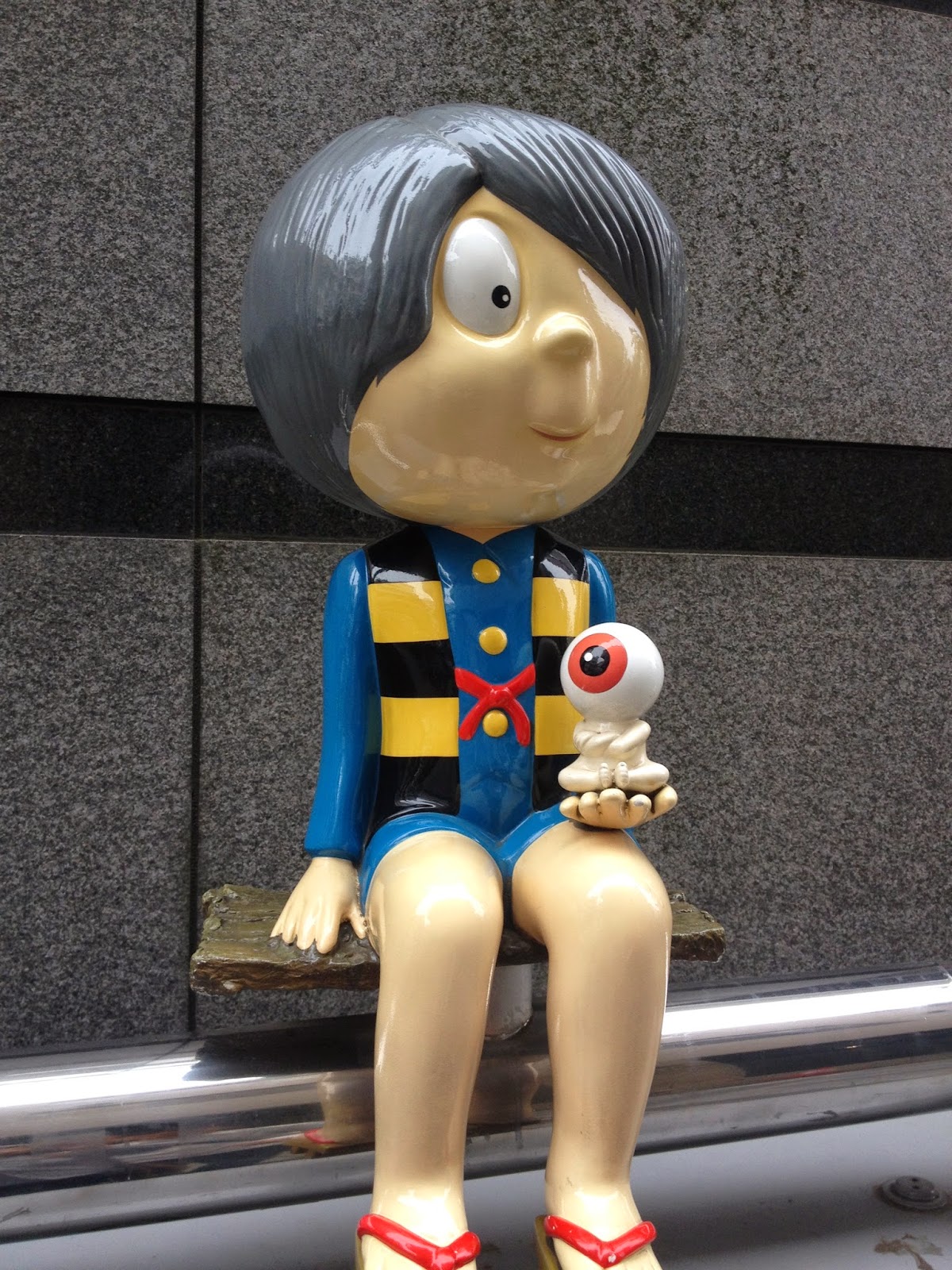 鬼太郎と目玉の親父がいました。調布駅。いまだになんで目玉がお父さんなのかわからない。すごい想像力。I found "Kitaro", Japanese famous yokai(monster) manga character near Chofu station. He holds his father(!) shaped like an eye ball. Such an imagination.... 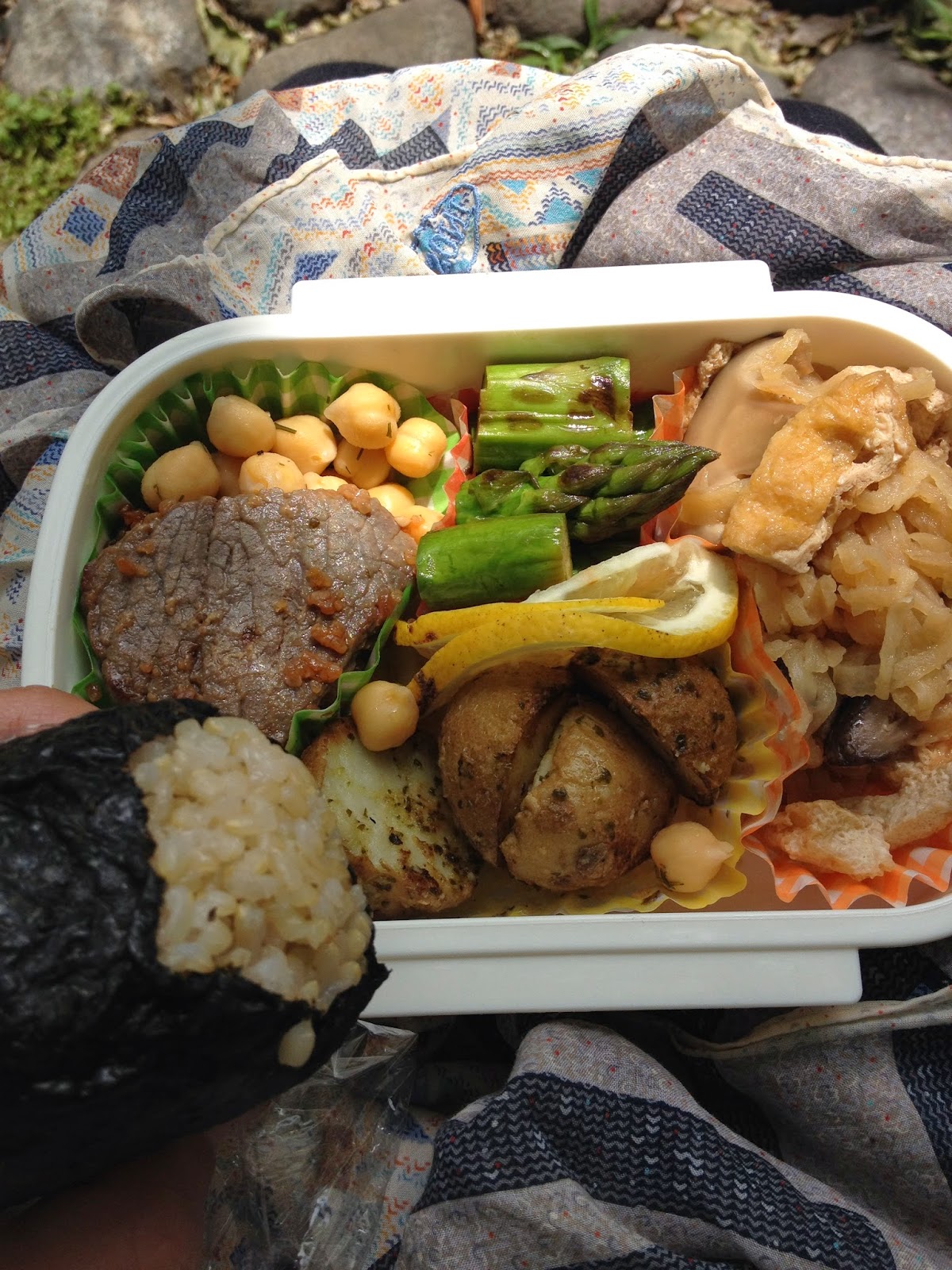 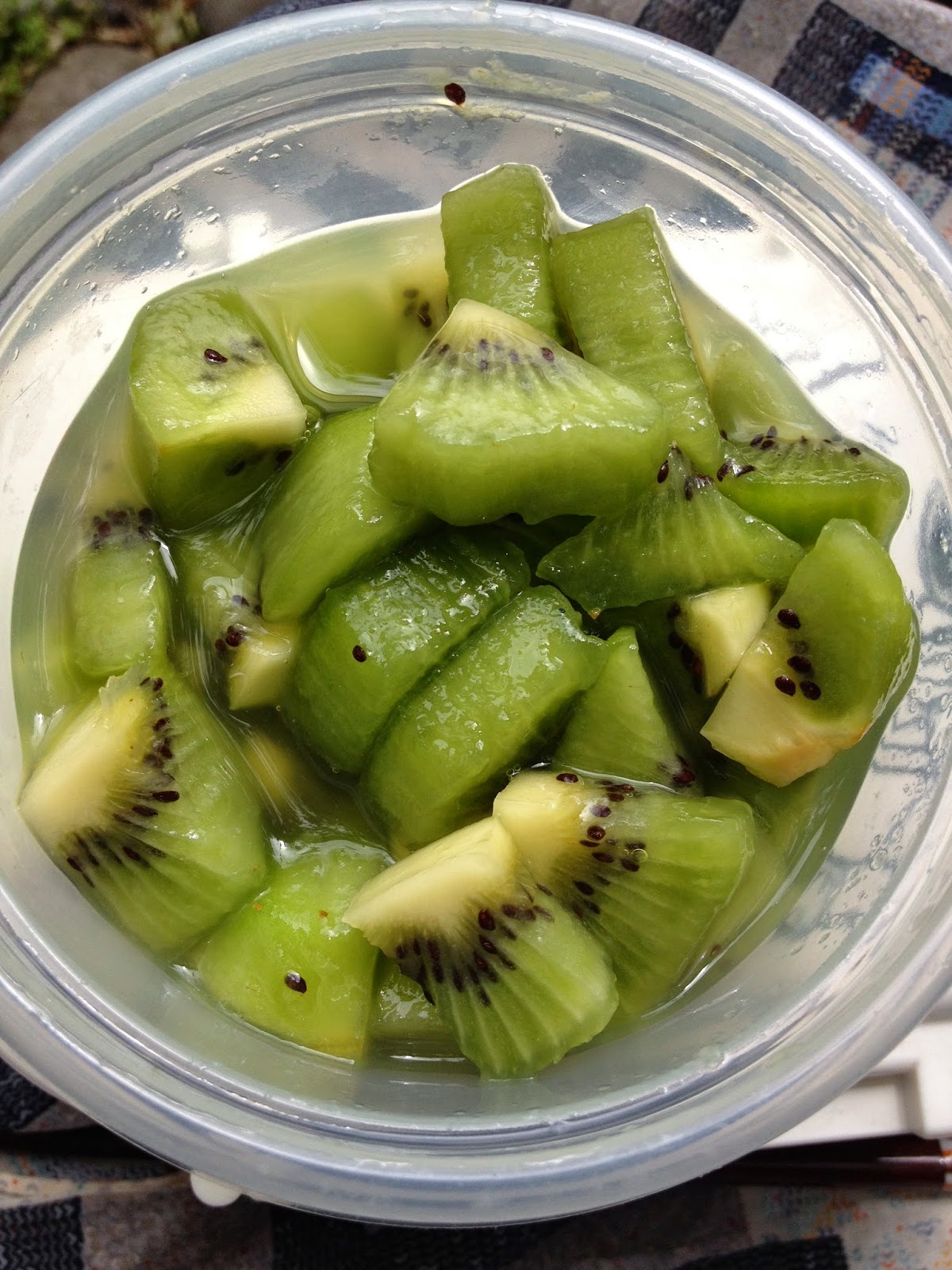 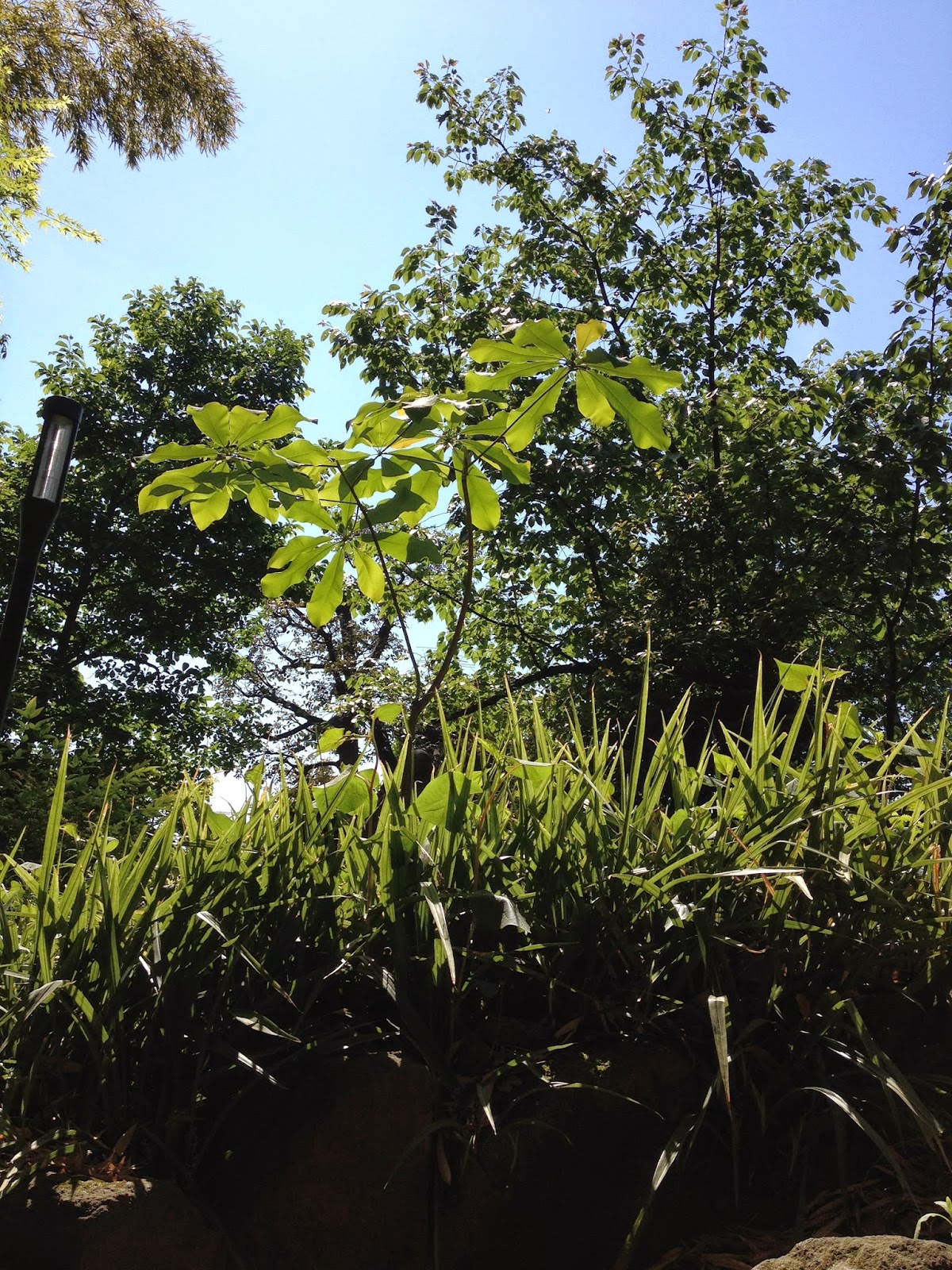 近所の公園で。グングンのびている。At the park near my house, they're growing so fast.
投稿者 Momo 時刻: 19:26 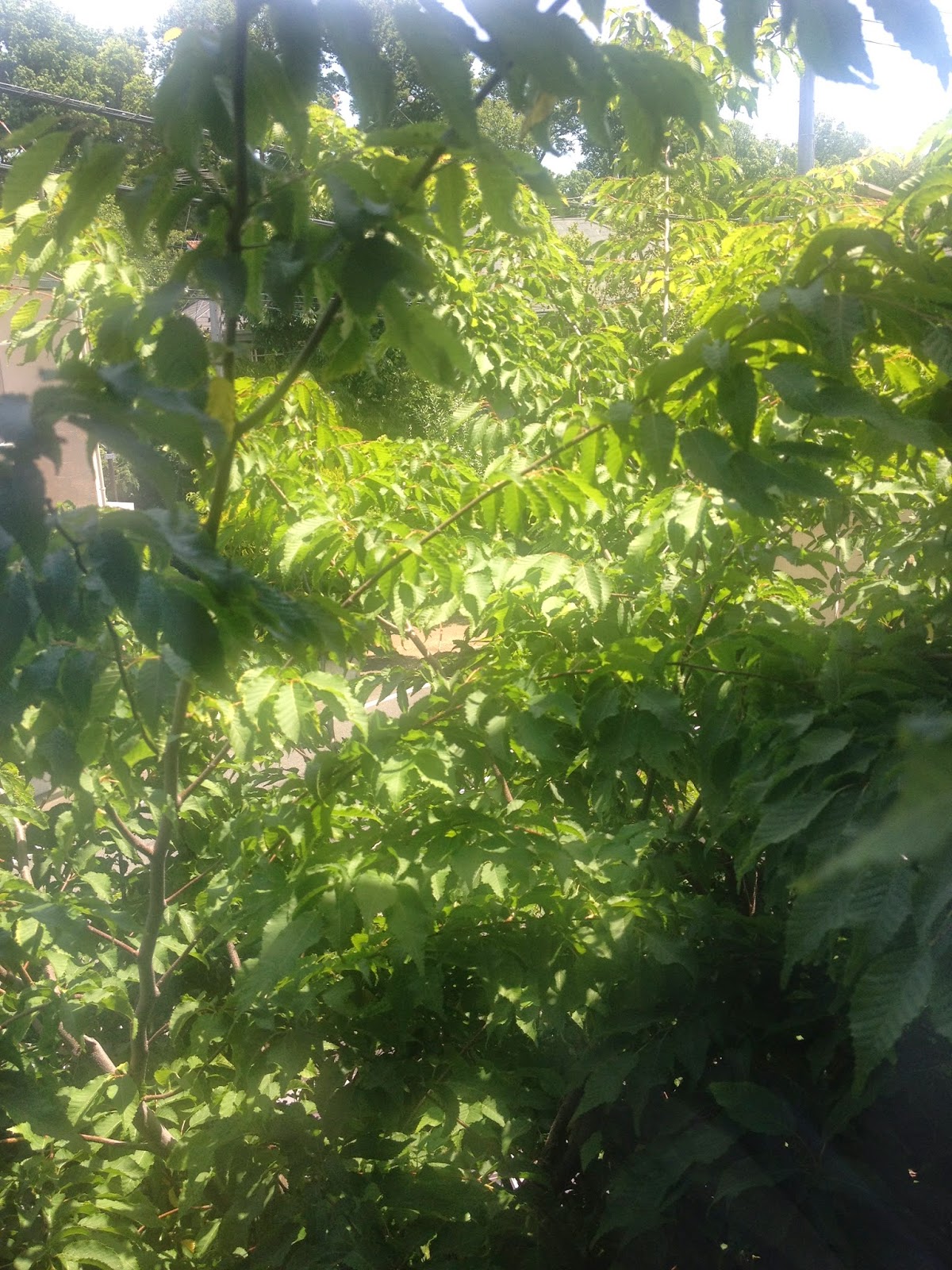 気持ちよく晴れている。今日はリハとレッスン。窓の前の木がニョキニョキのびている。
It's so beautiful day with fresh greens everywhere. I love these season in Japan so much, it's short but fresh and gorgeous.
投稿者 Momo 時刻: 11:21

I've just bought Engish-English dictionary, a real paper one, not a digital one. But actuary it connected to the on-line dictionary and I can access it with number which was written on the first page. It's convenient, but I realize I prefer the heavy paper one because I can see the other pages and other words in the same page through searching. It's fun, even more than I expect.

Today, I have to re-write my score to be readable to the other people, now it's like an ancient text...

I'm reading Mr. Takemitsu's book called "Confronting Silence". While reading his text, I felt something same from his music. His philosophy for music and world itself is so interesting and inspiring. Sometime I agree and sometime not, but I both enjoy a lot.
投稿者 Momo 時刻: 10:43 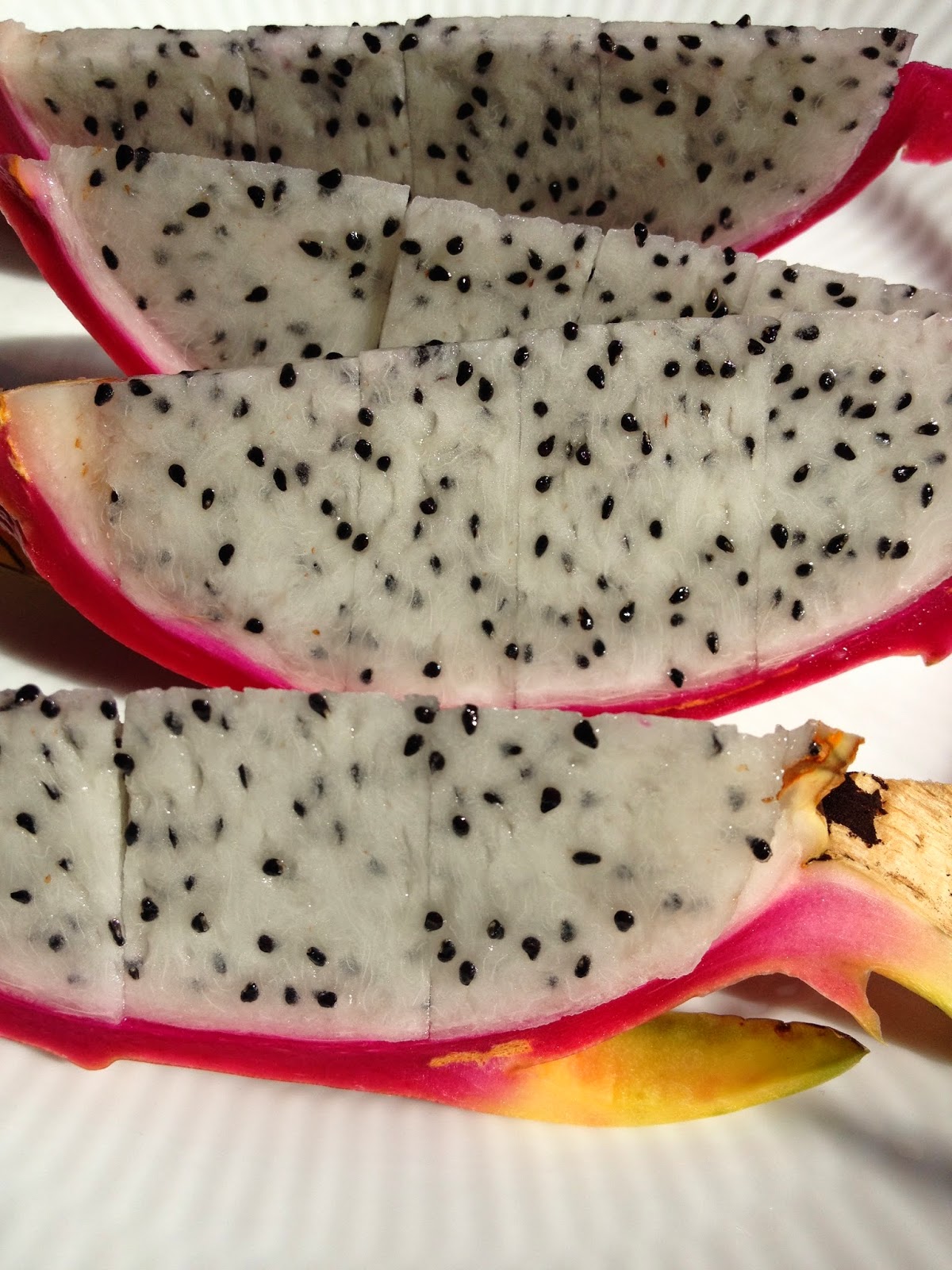 ドラゴンフルーツ。初めて食べた。見た目が可愛い。
"Colera for sale in NY"の動画、面白い試みだなと思いました。街行く人が気軽に寄付できる形として。
アレンジ、気がついたら音が多くて雑になっている。必要な音だけでいいのだ。見直そう。
It was first time to eat dragon fruit. the shape and the colors are so cute. It made me imagine the view of the asian countries where I've never been.  I would like to visit those countries such as Vietnam, Malaysia, Thai land and so on..
I found the video of "Cholera for sales in NY" on FB, was interesting project. I aware that the fact that I can get tap water everyday easily was really fortunate and I should be grateful for it.
I'm still doing my arrangement....to much notes..should be more simple and strong. 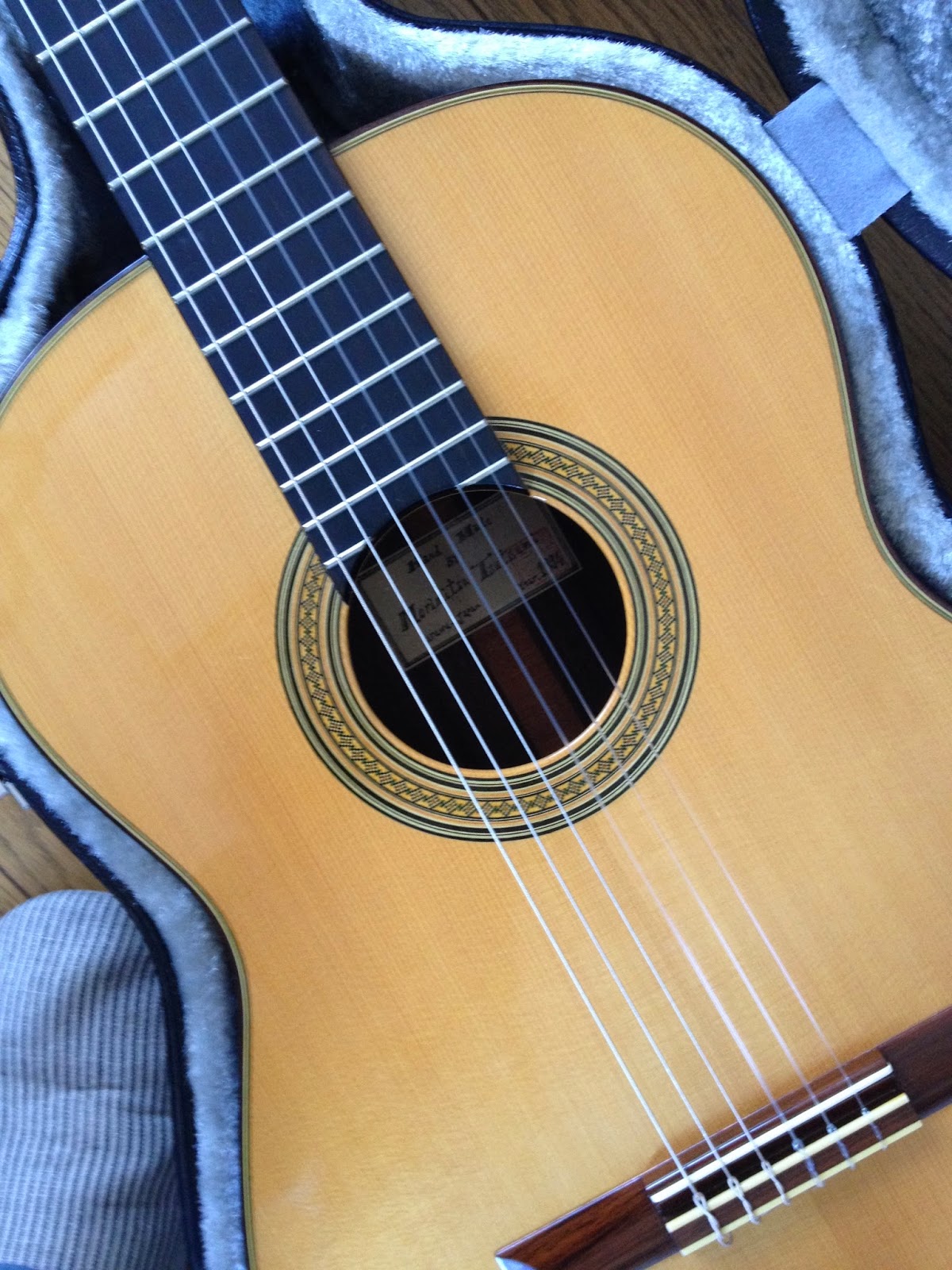 伯父さんの形見のギター。ギターのアレンジをする時などに使っています。すごくよい音のいい楽器。8月の吉川さんのコンサート用に自分の曲を編曲しています。
I've arranged several my songs for sop., gt., and pn. for the concert in Aug. The photo is my guitar which my uncle who passed away few years ago left me as a remembrance. It sounds so nice, handmade good one, and it reminds me him and somehow warms my heart. But right now I'm just work out that my voicing in my head suite for the guitar or not, difficult but so much fun.
投稿者 Momo 時刻: 9:13 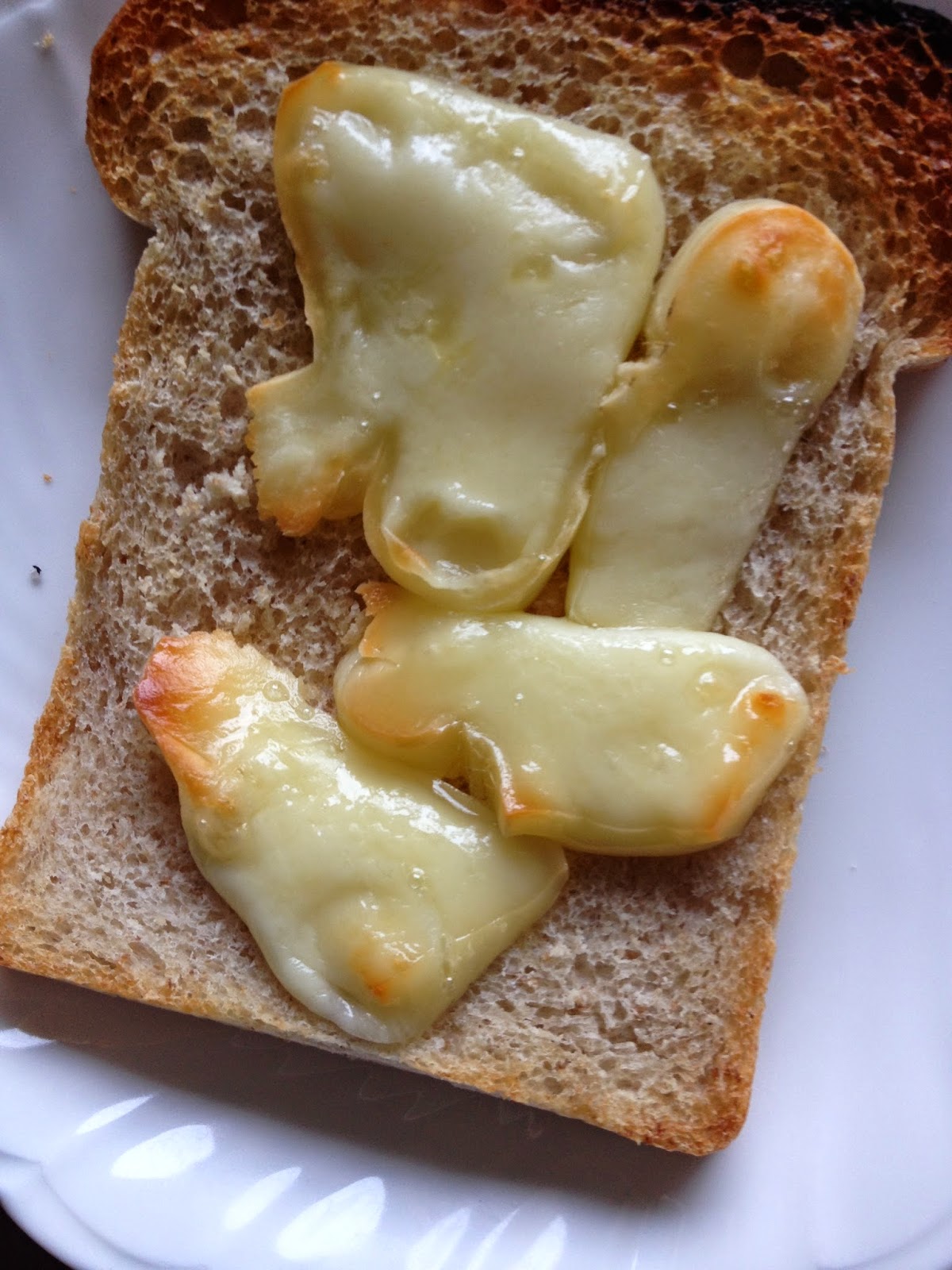 Momo
Momo Pianist/composer/arranger born in Toyama, Japan. She graduated at Senzoku College of Music and Berklee College of Music, which awarded her Toshiko Akiyoshi award for outstanding jazz composer. In 2005. She participated BMI jazz composers workshop, directed by Jim Macneely and Mike Abene, in NY during 2005-06 season. After she came back to Japan 2006. she appears many concerts and recorded works as a pianist as well as a composer and an arranger. Her composition, "Skyworks 2" for mandolin and guitar was published in 2013 by German publisher, Trekel. She formed her trio which focused on her original compositions in 2013. She likes walking, running, swimming and reading books. Her most favorite animal is dolphin and one of her dream is swimming with dolphins. Momo ピアニスト、作曲家、アレンジャー 富山に生まれる。2005年に洗足学園大学ジャズピアノ科、バークリー音楽学院ジャズ作曲科を卒業。バークリー音楽学院からジャズ作曲部門で秋吉敏子賞を受ける。 2005年カリフォルニアにてヘンリーマンシーニインスティテュートに全額奨学金で参加。2005年から2006年にかけてNYでJim Macneely, Mike Abeneの監督のもと行われるBMI jazz composers workshop に参加しビッグバンドの作曲について若手作曲家と共に研鑽を積む。 2006年帰国。日本で北陸、関東を中心に様々なコンサートにピアニスト、作曲者、編曲者として出演する。2009年拠点を関東に移す。 趣味は散歩、ジョギング、水泳、読書。好きな動物はイルカ。夢の１つはイルカと泳ぐ事。